So this was going to be a piece bragging about how awesome the Dungeon & Dragons miniatures I painted are, but it turns out what looked flawless at a glance is fucking garbage when I took some closeups with flash. (Click to enlarge the image) 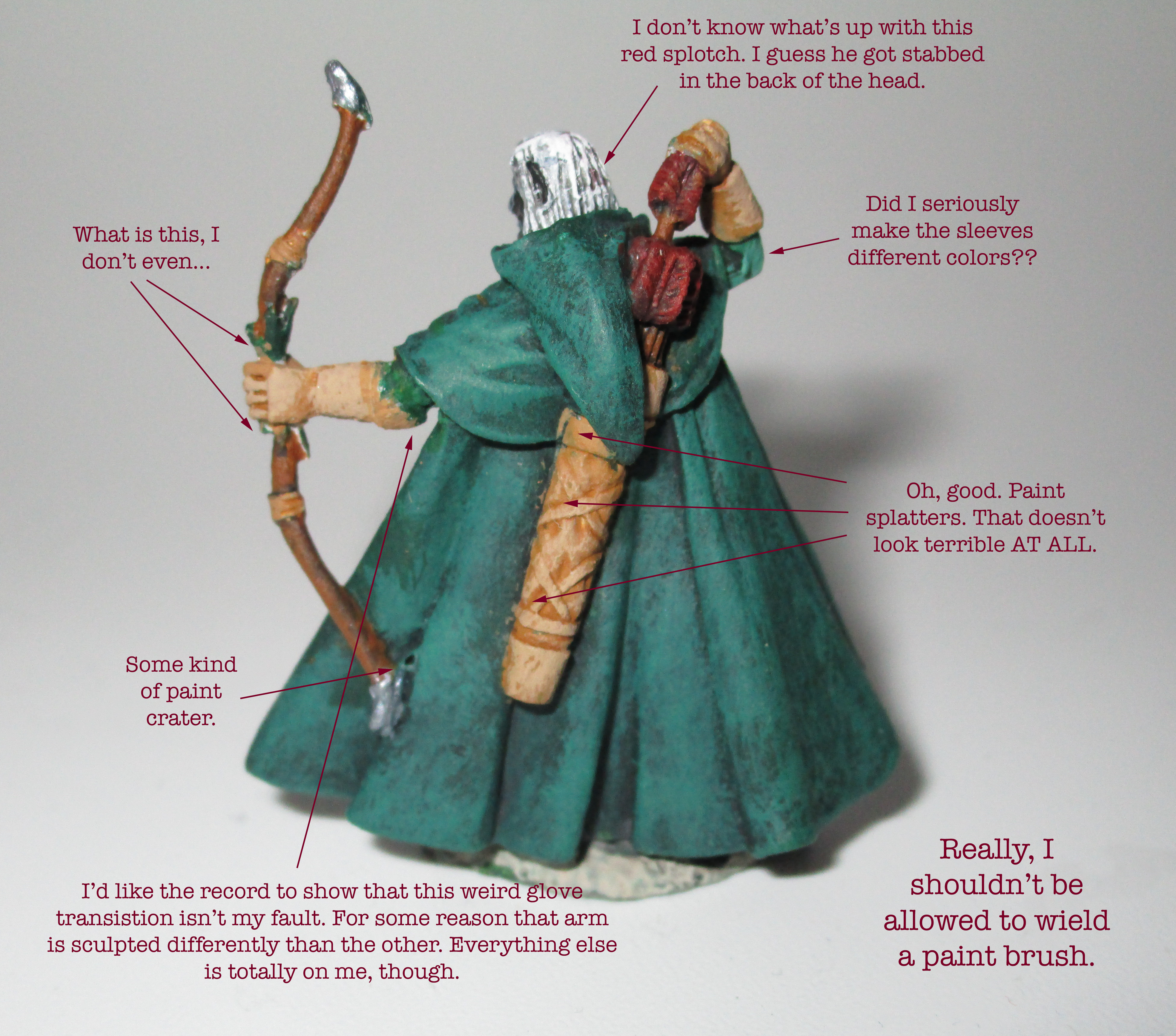 Eventually I’ll fix all that, but in the meantime I can at least give you a review of the Bones Learn to Paint Kit by Reaper Miniatures. I chose this brand of paint because it’s by the same company that made some minis I bought at my favorite game store in Corvallis. I’m a complete beginner, so that was frankly the only brand I had any experience with.

I’ve been tempted to take up mini painting in the past, but I resisted on the grounds that I couldn’t really justify the expense and time learning would take when it was purely for fun. Luckily(?), Tim’s birthday rolled around right after I had agreed to take over dungeon master duties for our little group (Me, Tim, and Dave). He had created a couple of cool characters to play—-a tiefling paladin and a drow ranger, if you’re interested—-and it occurred to me that custom minis would be a perfect gift. (The fact that I was dying to try mini painting had nothing to do with it. Honest. No, seriously. Why are you looking at me like that?) Anyway, here’s my thoughts on this product. 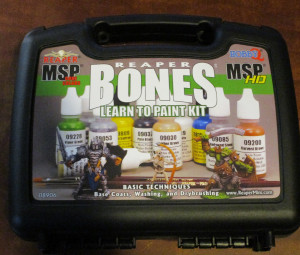 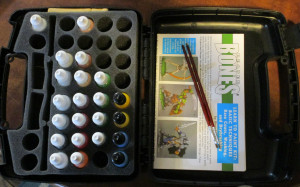 The Reaper Kit really does have everything I needed to learn how to paint minis. I was impressed that it came with three projects of escalating difficulty rather than assuming I’d be an expert after only doing it once. (I actually only did the most advanced mini, partly because I’m impatient and partly because I am already familiar with the required techniques thanks to my experience with mixed media painting.) The instructions were detailed without being too technical.

I’m a major fan of the eyedropper bottle style of paint storage Reaper uses. It makes matching custom colors much easier, as in “mix two drops of Viper Green with one drop Pale Saffron and three drops water.” That came in handy when I wanted to, say, make an orange cloak match a belt when I was painting them on different days. I just wrote down the formula and hey, presto! Not even my shitty memory could screw with my colors. It also minimizes wasted paint by making it unnecessary to mix up more of a color than you need “just in case.”

There are two types of paint in the kit: the regular Master Series Paint Core Colors and MSP HD, which has a higher pigment density. That makes the HD ideal for base coats, as it only requires one coat to  get good coverage. You then use the regular paint for washes and highlighting. Personally, I don’t mind applying several coats for a base, but I can see how the HD would be a boon for people who paint minis enough to need to save time and paint.

I was pleasantly surprised to find the case the paint came in was not as flimsy as I had anticipated. It’s made from a good, thick plastic, and the latches close securely. It includes two sizes of brush, which is nice for people who don’t already have a wide variety lying around. They were good enough quality that I only felt the need to use one additional brush (a tiny one for detail work). If the small brush had been a bit smaller, I wouldn’t even have needed that. They’re not fancy or anything, but they’re perfectly adequate for the intended purpose.

The kit doesn’t include red. Now, I realize that red is not used in any of the included projects, but  come on! It’s a “Learn to Paint” kit, which means that whoever is using it doesn’t already have a complete set of paint handy. Would it have killed Reaper to include one little bottle? Yes, the list of included colors is clearly stated on their site, but I don’t blame myself for not reading it closely, because I assumed it was a given that a STARTER KIT would include all the motherfucking primary colors. The set also doesn’t come with primer, but I can understand that. After all, the whole point of the Bones line of minis is that they don’t need to be primed. (More on that under “the ugly” section.)

While I appreciate having two different formulations of paint, I think Reaper could easily break their collection into three types. The opaque HD, the core MSP colors, and one billed as only suitable for use as a wash. One of the colors in particular, Shadowed Stone, is WAY too fluid and watery to have any other use. I found that out when I tried to use it the same way as the other core paints on one of my own projects. I easily mixed what I wanted from the other colors, but it would have saved me some frustration if it had been properly labeled as different from the multi-purpose core colors.

Speaking of washes, the enclosed booklet instructed me to use several drops of water to dilute the (acrylic-based) paint for that purpose. It works fine, but nowhere does it mention the potential problem with that technique. As those of you who use acrylic paint extensively already know, diluting acrylics too much with water compromises the pigment binding and can limit the longevity of your hard work. Acrylic paints ideally should be diluted with a fluid acrylic medium, especially if they need to be thinned a lot. It would be nice if there was a paragraph in the booklet somewhere that lists alternatives for making washes. I admit this is a small, nitpicky, only-an-artist-would-care criticism, though. (For the sake of this review, I followed the instructions to use water, but I grumbled the whole time out of principle. That’ll show ’em!)

I’m going to quote directly from the booklet, here. “Reaper brand paints adhere well to Bones plastic, and no primer is needed. Once dry, applied paint is also fairly durable, and does not require sealing. Other brands of acrylic-based miniature, craft and artist paints apply well to the material but may not be as durable. Paint applies best to figures which have been washed with soap and water, but Bones miniatures can be painted straight from the package.”

One of the selling points of the Bones plastic miniature line for me was that it wouldn’t be as fussy to paint as metal minis. So imagine my shock when I discovered the day after painting it that the Bones mini I had chosen for my uncle had paint flaking off in large patches. We hadn’t handled it at all (I stuck the mini to a clothespin with putty so I could paint it without having to touch it), the paint just straight up didn’t stick to the plastic. So far, I’ve had to touch it up twice. I’m still pissed about it.

As it happened, I had ordered a bottle of Reaper’s brush-on primer to use on the metal minis I bought. It worked to keep the paint attached to the metal, but I had a hell of a time using it. No matter how much I shook the bottle, mixed it with a straightened paperclip and pled with it, there were still giant granules all over the minis when I has done. I had to go back and scratch them off so they wouldn’t show on the finished product. It’s possible I was doing it wrong. Maybe I was supposed to dump the primer out of the eyedropper bottle, mix it thoroughly, and somehow stuff it back inside. Next time I think I’ll just try using gesso and save myself the headache.

Despite the rage over the priming issue and lack of red, I still had a good experience with the kit overall. I can’t deny the convenience of the Reaper painting system. The plastic Bones miniatures are a great idea even though they promise more than they deliver. I fully intend to use this set of paints—and the techniques I learned from the instructional booklet—in the future, as well as purchase more Bones minis. (As a side note, the metal minis I got from Reaper are awesome and more detailed than the plastic Bones, although not as durable.) I’m going to go ahead and recommend the Learn to Paint kit to any of you who are raw beginners in mini painting with the caveat that you be aware of the system’s limitations.

Just stop being stingy with the fucking red paint, Reaper.